Over 100 members of the Ecumenical Forum of European Christian Women gathered together from 24 countries and from all traditions of the Christian family to share in prayer, fellowship, discussion and pilgrimage. We met at the Orthodox Monastery Sveti Nikolaj, Soko Grad, Serbia. We thank the local women who have welcomed us, and the people of the Monastery who have been such generous hosts.

With prayerful reflection on the book of Esther and guided by the text “if you remain silent in this time”, we discussed what it means to speak out as women in our churches about the issues we face within our contexts.

We will speak out:

We stand together with our sisters to achieve the recognition and meaningful participation of women within our churches.

We will continue to develop and support projects that contribute to the social, political and economic empowerment of women.

2018 marks the 20th anniversary of the end of the World Council of Churches’ Ecumenical Decade in Solidarity with Women. We regret that there is still a need to address its original priorities, and urge all churches to recommit to these. In particular we call for the support of governmental ratification of the Istanbul Convention, as well as the Thursdays in Black and White Ribbon campaigns, which demand an end to violence against women.

We walk together with women of all Christian denominations and all faiths on our journey towards equality and celebrate our participation as members of the Side by Side Movement for gender justice.

We will challenge current European and national laws and policies which lead women to undertake unnecessary acts of survival, resulting in a loss of human dignity. We will work in solidarity with women who are at the mercy of traffickers and smugglers.

We provide a platform for women to share knowledge, raise awareness, and to develop an informed opinion on issues women face today.

We seek to be voices for peace and reconciliation within our churches, communities and the wider world.

We have been on pilgrimage together and created a space to share and express our spirituality. Renewed by our gathering, may God lead us on our way with joy and peace as signs of Christ’s love on earth.

The 10th General Assembly of the Ecumenical Forum of European Christian Women took place in the Monastery Sveti Nikolai, Soko Grad, Serbia from 7-12 August 2018. The conference theme was taken from the book of Esther 4:14 ‘If you remain silent at this time …’

We will be posting our reports from the Assembly over the next few weeks. T 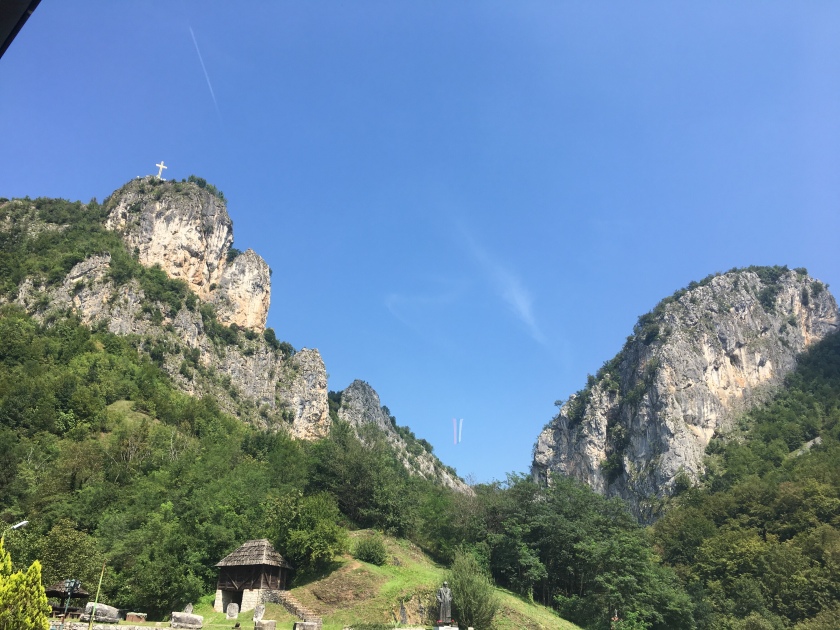 Kathy Galloway gave a keynote speech on the first day.

She described how a few years before she had been given the Esther text to preach from – it had become clear that the woman reading the lesson had not read in advance as her voice gradually became higher in pitch as she became more indignant. Ancient stories may be heard differently by modern woman – Esther is a horror story of misogyny and violence – three women speak within it.

Vashti – we are not told what she said – we are told what she did – she is perceived by men to be great threat to all men. The second woman to speak – Esther herself who has to be seen to be the most beautiful – after a year of becoming groomed in the harem. The wife of Haman also speaks – she builds him up – and tells him to raise the gallows.

We are presented with the bad wife, the complicit wife and the good wife.

Vashti is used to show asolute male dominance. The wife of Hamam brings disaster upon her family and Esther is the great tactical heroine.

But the saved people go on to kill 75,000 it is not a comfortable story. In a continuing struggle against patriarchy what does it mean to speak truth to power?

There are many biblical women to encourage us.

It is always important to speak to those around us – look at the Samaritan woman who risks to speak to Jesus. We can volunteer, post on bulletin boards, offer hospitality, meeting spaces in churches or homes, partner with existing resources and speak without words through our physical presence. Look at Rizpa sometimes all that remains is to bear witness and call to account the rulers of the world. We can become a resource like Mary in her home. We can give voice by supporting professional training like Lydia in her agency as a successful business women. In readiness to listen and act in faith

We can never give up

Politely and patiently – with determination- as women we are ensuring the silence breaks on gender injustice.

We can say no. We can resist everything that distorts the image of God in human beings. And we can be the one who says yes – like Mary the mother of Jesus.

To need to move from personal comfort to solidarity – we are not alone – in the midst of our struggles is Jesus saying do not be afraid.

We were delighted to learn that the Rt Rev. Dr Gulnar Francis-Dehqani has been elected Vice President of the Conference of European Churches at its recent General Assesmbly.  As reported on the CEC website Bishop Francis-Dehqani said,  “My priority is to be engaged with others in work around issues with refugees and the movement of people across Europe,”. Coming originally from Iran, since 2017  Bishop Francis-Dehquani serves the Church of England as the Bishop of Loughborough with a particular brief to work with diverse cultures and minority ethnic communities within the Diocese. We would like to extend our congratulations to Bishop Francis-Dehqani and hope to be able to introduce her to the work of the EFECW during her time in office. 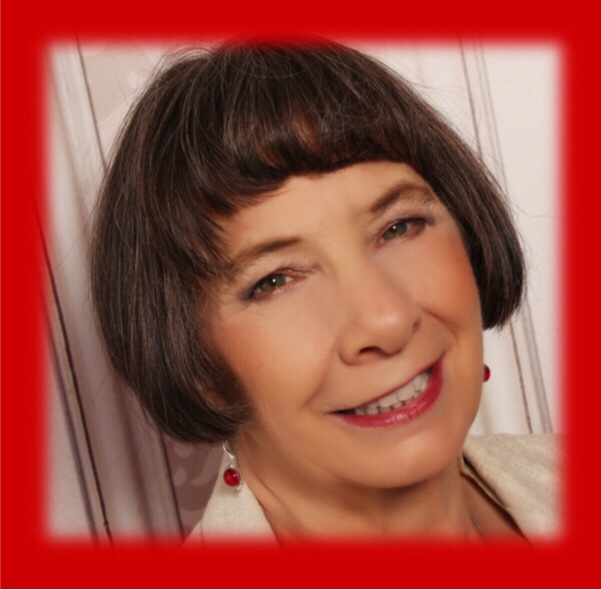 Booking is not essential, but, for catering purposes, please let LKH know if you will be attending :

Five years ago at the Conference of European Churches general assembly a vote was taken to remove quotas of women and young people that had been in place for many years. The EFECW voting place was also removed. Members of the forum strongly opposed this at the time believing that this would diminish the voices of women within CEC. When the subsequent CEC assembly begins on May 31st we will be watching to with interest to see the balance of women, men and young people looks the same as the last assembly with the quotas in place or whether there is a marked decline in the numbers of young people and women.

Within the forum, as we approach our assembly, we have also been discussing quotas. In England the forum inevitably reflects the demographics of many churches with a larger number of older women being active. Our newer ‘networking’ has been designed to reach out to younger women through this website , the use of social media and by working in partnership with other organisations in the promotion of events.

Despite our best efforts we do not have a younger woman to take the reserved place in the England delegation to the EFECW General Assembly in the summer. Even though we are beyond the deadline for registration we are still hoping we may find a delegate under 40 who would be able to take up a bursary place. If this is you or someone you know please contact us! After much consideration the national coordinators took the decision not to fill the place designated for a younger woman with someone older. Our experience, from many different settings, is that when quotas are not upheld it can be easy to lose sight of the need for change. When we return from Serbia we will be putting fresh energy into the continuing life and development of the forum. We know many are with us – please spread the word!

Related to the Istanbul Convention is the current consultation by the British Government ‘Seeking to transform the response to domestic abuse’.

There are four aspects of the consultation;
 promote awareness – to make sure everyone understands what domestic abuse is and how to tackle it.
 protect and support – to improve the safety of victims and the support available.
 pursue and deter – to ensure that perpetrators are held responsible for their actions and that the response of police and the justice system is effective.
 improve performance –to encourage all services and organisations working with domestic abuse victims or perpetrators to do so in the best way possible.
To read more and to participate in the consultation visit https://consult.justice.gov.uk/homeofficemoj/domestic-abuse-consultation-short-version/

We are delighted that our Free Churches National Coordinator, Anthea Sully, has 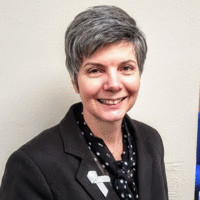 been appointed as the new Chief Executive of White Ribbon UK.  White Ribbon UK seeks to end male violence against women, once and for all, by engaging men in calling out violent, bullying behaviour amongst their peers, and spreading a message of equality and respect. You can find out more at https://www.whiteribbon.org.uk/

The UK has now ratified The Council of Europe Convention on preventing and combating violence against women and domestic violence. The ‘Istanbul Convention’ is based on the understanding that violence against women is a form of gender-based violence that is committed against women because they are women. It becomes the obligation of the state to fully address it in all its forms and to take measures to prevent violence against women, protect its victims and prosecute the perpetrators. We received an open letter from some forum members in Latvia after a group of church leaders had spoken against ratifying the convention. We have written our own letter in support of ratifying the convention believing that this is consistent with Christian values. 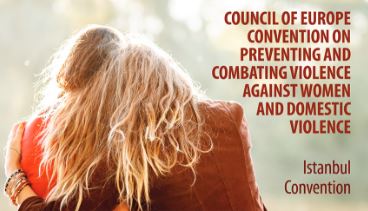 A call to women under 40
If you are under 40 and are interested in sharing ecumenically with other women across Europe and working with us to develop the forum in England, or you know someone who is, please get in touch! Our 10th General Assembly is taking place in Serbia in August 2018 and is a great opportunity to meet women from different traditions and countries – exchange ideas and be inspired.

As we explore new ways of participating in the forum in England we are particularly keen to find someone who would relish the challenge working with us to develop our virtual networking, social media, and this website!.We would like you to be involved!
please contact Anthea – at efecw.uk@gmail.com 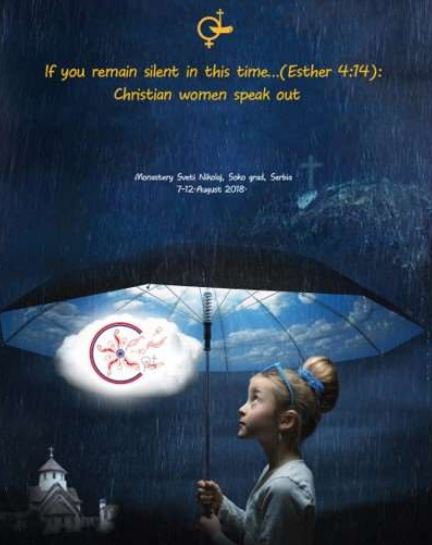 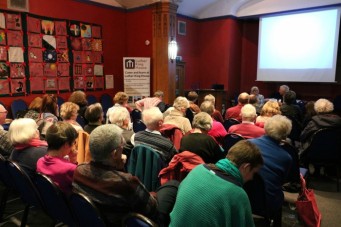 We partnered with Luther King House in February with a lecture from Sue Barclay, ‘View from the Mat – theological reflection on gender based violence in Uganda’. Sue opened by sharing some of the many stories in the bible that offer opportunities to reflect on gender based violence. Asking the question, ‘What if we use the life experience of the majority of people in the world ?’

Sue described her experience in Uganda where most women sit on the floor, in church and at other community gatherings. Reflecting on this, Sue described the change in attitudes towards the status of women that can come about from an understanding of Jesus’ compassion, his understanding of distress and his revelation that women are valued equally by God. We were offered three words to lead to structural change in the power dynamic; mourning, lament and resistance.

EFECW England National Coordinator, Anthea Sully, with shirts from -The Clothes Line Project. This moving community art work from the Baptist Union of Great Britain & Ireland was exhibited at the event. Each shirt is made by a woman survivor of abuse

Support the EFECW in the UK

Our National Coordinators in the UK are Dorothy Knights, Sr Brigid Collins and Anthea Sully.  You can contact us at efecw.uk@gmail.com we welcome all women to become friends of the forum and sign up to our newsletter. We are particularly keen to hear from women who are interested in helping us to develop our network and social media presence.

The Ecumenical Forum of European Christian Women in the UK
Blog at WordPress.com.
Loading Comments...